The bad news today is that Samuel is in the Choir!!! I know it's a major disaster.
He didn't want to be in it but his 'Evil music teacher' made everyone in the class sing and if they got a tick next to their name they were in the choir. Samuel was disgusted to find a tick next to his!!! Then to add insult to injury he took a corner too fast on his way home, fell off his bike, banged his head (thank heavens for helmets), hurt his knee and ripped a hole in his new school trousers. All in all not a good day.

On the plus side though....the good news was he got a Head Teachers award for his homework. He had to find out about the first animated and silent movies. So he found out which ones they were and got his dad to put them on a pen drive and took them to school for his class to watch. Whatever next :) 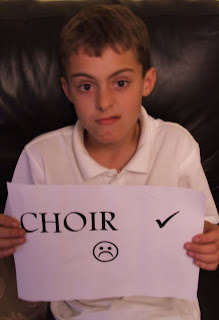