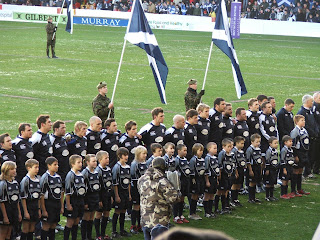 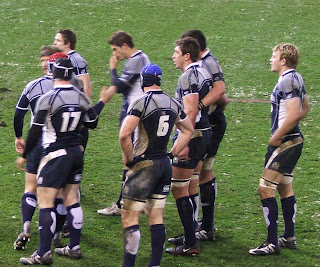 Yesterday was amazing. Apart from the dodgy weather on the way to and from Aberdeen it was fantastic. We had to park way over on the beach front and walk accross the golf course. It wasn't actually that bad as the snow was really crunchy and we just followed the crowd.

Our seats were great and we had a really great view. In the second half we were in the right place to see two trys. It was brilliant and even though I have no idea what was going on I was cheering with the rest of the crowd, standing up to get a better look, doing the Mexican wave (Samuel thought this was brilliant) shouting 'Heave' when they were in a scrum and trying my best to get some photos. Oh and I must learn the second verse of Flower of Scotland as I only know the first one!!
Hhmmm photos that's another story. I really must read the instructions on action shots and get a bigger zoom. Apart from the pictures of Samuel friend Callum (which turned out OK as they were standing still) all the others were blurred in some way!! Never mind there's always the next match.