Today was a busy but funny old day. It started at 3.30am, then 5am and then 7.30am with poor Harry coughing and crying. He was at the doctor by 9 o'clock but once he got there he never coughed at all!! He'll survive but his Mummy might not!! 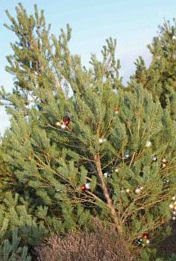 Later we popped over to Roseisle to see the Wishing Tree and then went to Baxters to try and see Santa but as he's so busy today he'd left early. Still the pancakes were lovely and there will be other years for Harry to see him. Ruth took Harry home for a nap and I took Samuel to the pub to meet his Dad and Uncle Andrew and we ended up playing sporty games on the Wii. Ruth and Harry thought they'd been abandoned.

We ended the night with a Chinese from the yummy village take away, which is a Christmas Eve family tradition.

It's now past 10 o'clack and both boys are still awake!!!