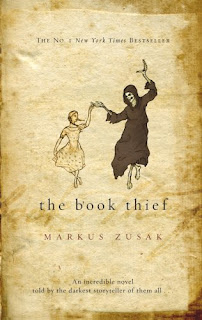 When I first saw the title I thought it probably wouldn't be my "Thing" but after reading the back I realised it was right up my street. I'm only half way through at the moment but it's a great read. Here's a little bit about it if you don't know already.........

The book thief is the alter-ego of a nine-year-old girl called Liesel, whose life history is narrated by none other than the Grim Reaper himself. Now Liesel has both the misfortune to be raised alongside the burgeoning Nazi state in Germany and the good fortune to be sheltered from it by a vehemently anti-Fascist family, the Hubermanns.

It is 1939, Nazi Germany. The country is holding its breath. Death has never been busier, and will become busier still. By her brother's graveside, Liesel Meminger's life is changed when she picks up a single object, partially hidden in the snow. It is "The Gravedigger's Handbook", left there by accident, and it is her first act of book thievery. So begins a love affair with books and words, as Liesel, with the help of her foster father, learns to read. Soon, she is stealing books from Nazi book-burnings, the mayor's wife's library, wherever there are books to be found.

However, all this changes when her father's long-forgotten wartime promise comes to fruition and a desperate Jew lands in their basement. Unwittingly, Liesel finds herself thrust into the front line against the all-too-real hatred of the Nazi state.