Drama at The Gables

It was drama time here last night after Samuel decided to fall off his bike and break his wrist!!! After tea we decided to take the dog down the lane for a walk and Samuel wanted to go on his bike. It's not like he hasn't done that a thousand times already. This time he raced off ahead and all we saw was him disappear into the distance......................then the wailing started. At first we thought he'd just cut his knee till he said his wrist was really sore and he couldn't move it!! 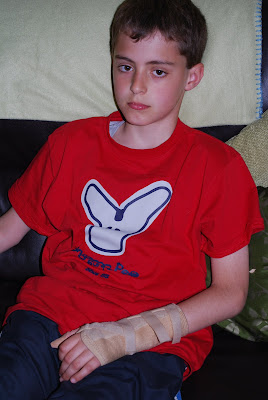 As he had his school trip to Badaguish today (with all the other Primary 7s who are going to the High school in August) we thought we'd best get it checked out. So after 4 x-rays and a few hours in A & E he came home with a broken wrist in a bandage and a splint. They wanted us to go back this morning for a cast so that meant he missed his trip all together. Thing was they decided this morning to leave the splint on for 10 days and then x-ray it again. If I'd known that last night he could have gone today and at least met the kids he's going to be with next term. 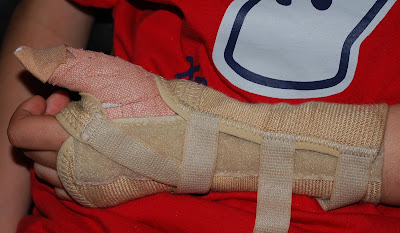 Never mind he seems fine today and now the painillers have kicked in he can just about play X-Box!!! He's back to school tomorrow.