- July 03, 2009
It was Samuel's last day of school yesterday and I think he is more than ready to leave. He went off in the morning looking smartish 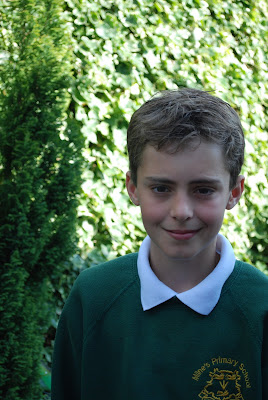 and came home covered in water from head to toe after a water fight with his teacher!!! Hence the wet hair!! She had apparently said that if they did well during the year they could have one on their last day. Guess they all did OK then!! 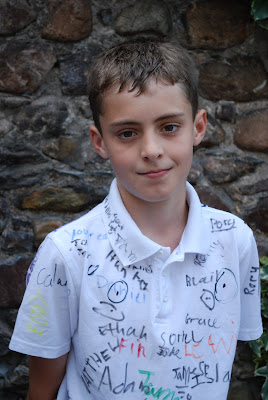 He got all his friends to sign his polo shirt (as is tradition nowadays!!) and even managed to get wee Ethan in P1 to sign too. (Samuel has been his buddy this year). He won't need polo shirts next year as it's shirt and tie from now on. After school some of the parents organised a BBQ and they had a ball. (More wet clothes). It was really sad for them having to say goodbye to Miss Cowie. She is leaving too, to go to another school in the area. She thanked me for her "Toilet roll book" and said it was the nicest gift she got yesterday. I think the kids did all the work colouring in the tags (all 57 of them). 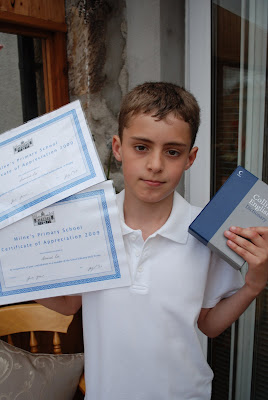 Although his face doesn't show it in this picture Samuel was really pleased to get two certificates at the award ceremony. One for the Library quiz team and one for rugby. All the P7s were presented with a dictionary which has a page on the inside with their name, the school moto and the headteacher's signature.
So that's it...Primary sachool is over and the High school awaits!!! Along with hormones and girlfriends. Am I ready for all that?