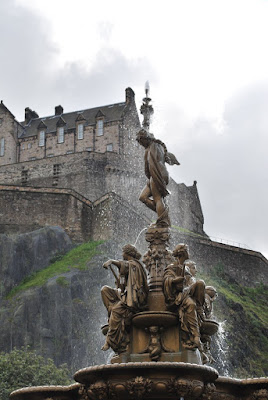 We have just had a fabulous weekend/3 days in Edinburgh, even if a little damp at times!!! That's good old Scottish, summer weather for you. Never leave home without a waterproof jacket!! We covered as much ground as we could in the 3 days but still have so much too see.

The top photo is the Castle (obviously) taken from Prince's Street gardens. 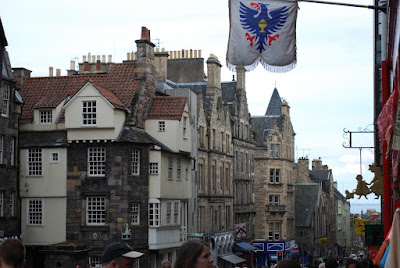 Then we have the Royal Mile, which stretches from the Castle to the Palace of Holyrood (still to see)!! I love the fact that Edinburgh still has all it's old, original buildings, unlike some cities that have knocked down the old architecture and built hideous monstrosities in their place (i.e. London/Liverpool). 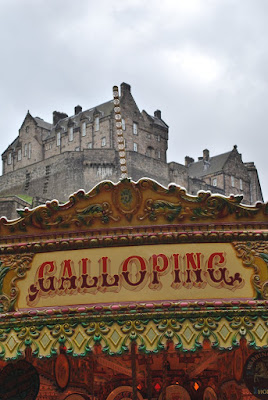 The Castle again with the Prince's Street Merry go Round in front of it. The gardens are lovely and stretch the whole length of Prince's Street, (which at the moment you can't walk along as they are putting tram lines down. From some of comments we heard I'm not even sure that Edinburgh locals actually want the trams back.)
The gardens must be packed full when the sun is out as they weren't doing too badly in all the rain. 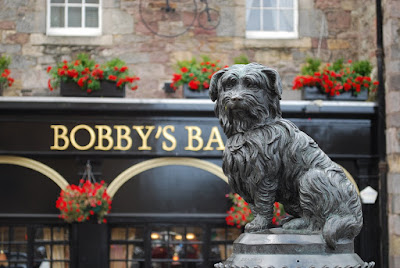 While Samuel and I were waiting for John to fly in from Amsterdam we went in search of Greyfriars Bobby who was a little dog who, after his owner John "Auld Jock" Gray died in 1858, stayed by his grave side for the next 12 years. Bobby slept under the stone table next to his grave and in the winter a local man would put sacking underneath to keep Bobby warm. The people of Edinburgh loved Bobby so much he now has his own grave stone in the cemetery and a monument in the street outside. In true tradition he know has pubs etc named after him too :)
Thursday night was Tattoo night.................................................