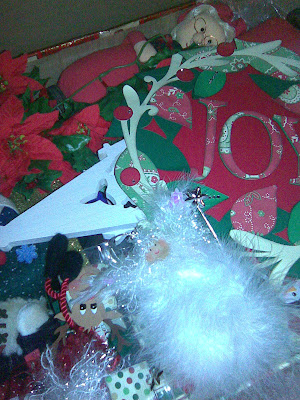 Whether we like it or not the big C is coming!! and before John set off on his travels he got some of the decorations down form the attic. I got as far as taking the lid off the box before telling myself it's too early to be thinking about decorating. Samuel loves to help with the tree and in the past I've let him decorate it all by himself.....................................only to re-arrange it once he'd gone to bed!! (bad mother). This year we've decided to put the tree up on the 6th as that's the day John's due home.

On a different note I took Samuel and his pal Big D to Starbucks on Saturday. Samuel and I pop in a couple of times a year so I was surprised to find that Big D had never been before. I automatically took it for granted that as we now have a shop in Elgin , he would have been in. 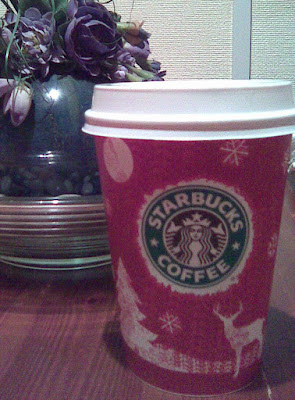 Samuel bought them both a hot chocolate as believe it or not he still had money left on a Starbucks card he got for Easter from his Auntie Ruth. Not being a big coffee drinker and because normally I think everything is over priced.......... I tried the Gingerbread Latte :) It was delicious and they should serve it all year round. I had to sneak back in today to get one to take away at lunchtime. Just because, you understand, it's a whole 12 months till they come back again :) Oh no I think I might need a second mortgage to keep me in GBLs :)