We had a very quiet, relaxing day yesterday which began early!! Even though he hasn't believed in Santa for the last few years it didn't stop Samuel getting up before 7am!! 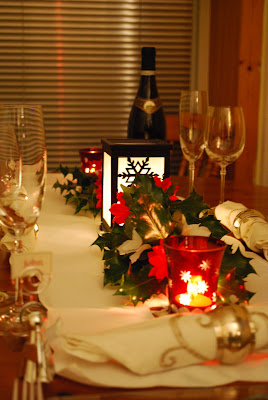 I have my own tradition of laying the table on Christmas Eve. That way it's all done ready for dinner on Christmas Day. This year I "Liberated" some holly from by the pond and used my lantern from Party Lite, which has snow flakes on two sides, in the centre. The red candle holders were a gift from work when I first started there nearly 8 years ago. 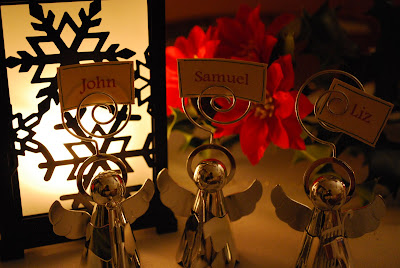 I found these cute little angels at a local garden centre and had to hunt around to find 3 to bring home. They didn't have many left by the time I got there. A bit of bazzill cardstock for name tags and hey presto, they were ready to go.
John made a gorgeous dinner and while the meat was cooking we took the dog for a stroll around the pond. Strangely enough we were the only ones there!! 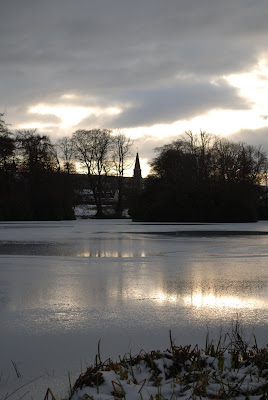 After dinner it was more relaxing and before we knew it it was time for Dr Who. Where does the time go on Christmas Day? 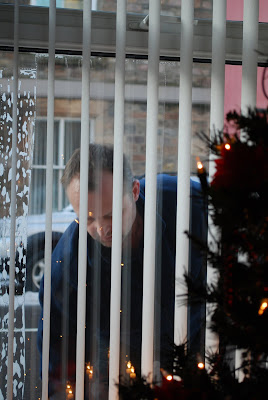 Today we're back to normal. It might sound a bit Baa Humbug but the washing still needs doing and the hoovering won't do itself. John even went out and washed the front room window!!

We're making left over casserole for tea and then I'm going to plan some crafty things for next year. I've got some ideas of what to make the girls at work!! Nothing like being prepared :0)
Labels: Home