Can you believe it? It's here already. Christmas Eve. It's been a busy old day with baking, trifle making, ironing, Wii - ing and take awaying. 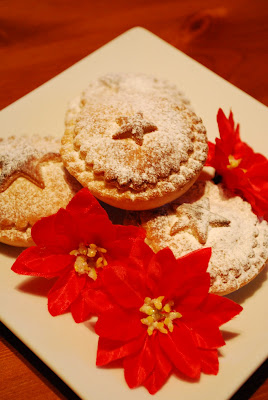 I made my very first Linzer cookies today and to say it was a team effort just about covers it. Samuel did all the weighing and I did the mixing and then John had to finish off the dough as it was too difficult to mix. While the dough was in the fridge Samuel made mince pies and jam tarts. Both of which have turned out fantastically well. (Well there's no jam tarts left so they must have been OK.) 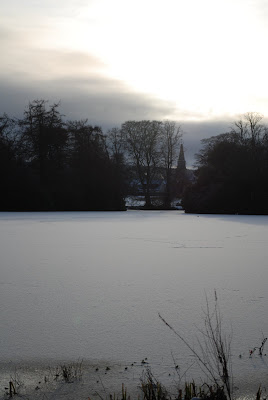 Mossy needed a walk after he'd had a bath (can't have the dog smelling...Santa might not come) so while John popped out to get some wine Samuel and I went for our usual walk around the pond. It was really icy today but after a quick sprinkling of snow it wasn't too bad to walk on. The pond was frozen solid and a few hardy ducks were having a swim (but not many)
When we got back it was time for a cuppa and a bash at archery on the Wii and after beating Samuel a few times he decided he didn't want to play anymore!! Wonder why? Anyway I left him too it and got to grips with the now solid dough in the fridge. A quick rolling, a quick cutting and into the oven they went. Boil some jam, spread on cooled cookies, stick two bits together, sprinkle with icing sugar and EAT. 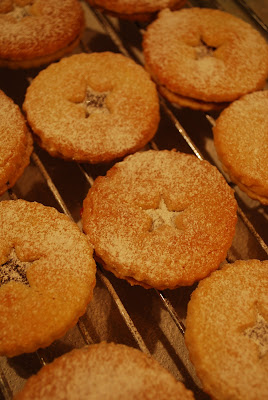 Why haven't I made these before? They are delicious and buttery and soon there won't be many left.
Now it's time to sit down and have a glass of wine and relax. There is nothing worth watching on TV but then, when has that been any different?
Labels: Home