A few days ago my sister text me to see if we were all OK as she'd heard on the BBC news that we'd had 6 inches of snow. I text back and basically said "What snow"?
Today we got that extra 6 inches of snow. Just after we set off to go into Elgin (about 9 miles away) the blizzard started. There were car wheels spinning everywhere and a huge lorry got stuck at the traffic lights in the village and couldn't get going. Luckily having the Landrover meant we could get there and back with no problems. 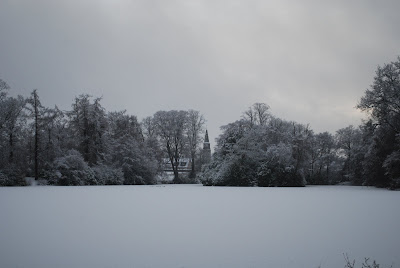 The snow had eased off by the time we got home so John and I took Mossy for a walk to our usual haunt.......the pond. Samuel stayed home to re-build the snowman who had started to thaw last night and had almost lost his head!! 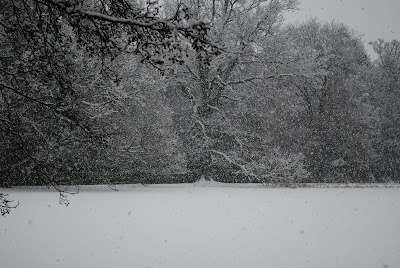 I love taking the same shot of the pond as I go round throughout the year as it means I can get every change in the seasons. I also LOVE the action option on the Nikon as it captured the snow as it started falling heavily again in the shot above. (click to embiggen - as Martha would say :0)) 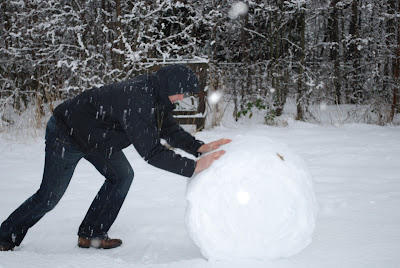 After climbing over a fence, to be the first to walk in a huge field of snow, John decided to make a snow ball. It looked like a huge roll of cotton wool as it seemed to roll in strips. Once he got started he had to keep going to make a snowman so I had to phone Samuel and get him to come and join in. 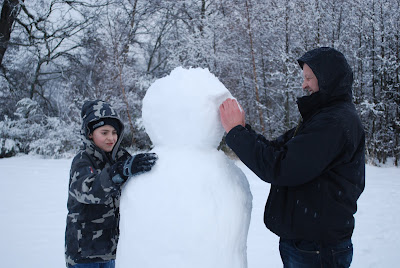 The two of them created a 6 foot tall one this time but we didn't have any sprouts handy for eyes today!!!!! 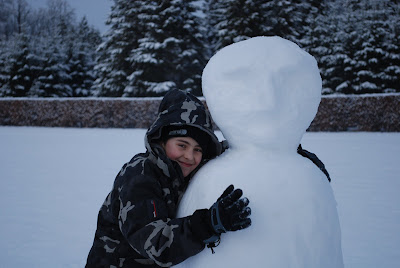 Samuel wanted to stay and make a snow family but John didn't have any gloves with him and his hands were just everso chilly!!
It's at moments like these that I'm grateful for my camera as soon enough Samuel won't want to make snowmen or be seen anywhere near his "embarrassing" parents. These pictures definitely come under the "I will scrap these" section.
Labels: Home