Today seems to have shot by. It started with ironing the school uniform and I'm now back from town a few £s lighter after taking the Landrover to the garage to get the brake pads changed!! Still it's not all doom and gloom. Samuel and I decide to spend the bus fare home on a trip to the cinema to see Percy Jackson and the Lightning Thief. It's no Harry Potter but I wasn't bothered as both Sean Bean and Kevin McKidd were in it. The latter in his Roman God skirt!!! For anyone not sure who Kevin McKidd is he's currently in Grey's Anatomy (which I've never seen) and was also in the brilliant BBC series Rome. And Sean Bean? Well he's just Sean Bean. Yummy :0) 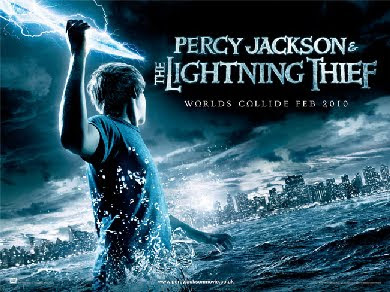 The film is about a boy called Percy who turns out to be the son of Poseidon and has to search for Zeus' lightning bolt that has gone missing. Steve Coogan is brilliant as Hades. Not what you expect the God of the Underworld to look like :0)

Samuel is now keen to read the others in the series and who am I to say no? A trip to the library is called for tomorrow.