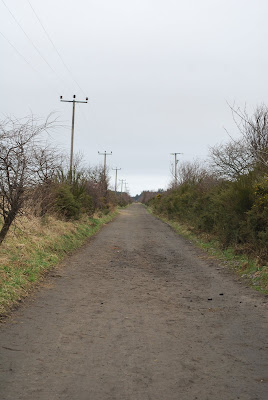 So here we are at the beginning of the old railway line that leads from Elgin to Lossiemouth. It's approx 6 miles long and if I'm honest not that interesting!! There's not a lot to see apart from farmland, the old Spynie Loch (marsh land that is thick and difficult to see through), a small section of the river Lossie and Spynie Palace.

This place, I love and have walked past here many times in the last 21 years. It was originally the Palace of the Bishops of Moray and had the original Cathedral attached to it (although that has long since disappeared). Some evenings in the Autumn the Moray Rangers do talks about the bats that live there. Unfortunately the time we went some one had taken their brood of 6 kids and let them run riot so you couldn't hear what the ranger was saying. But that's a whole different story!!

It took the last group just under 2 hours to walk there. That was because they were the slowest group in the school (and they were the seniors!!). After lunch there was time for a walk along the front to the ice cream shop and a quick view of the beach. Some kids wanted to go on the dunes but that was a no, no! 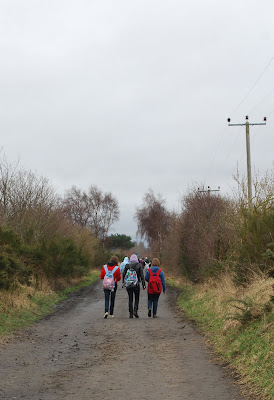 Then at about 12.30 it was homeward bound. My friend Elaine and I, plus a couple of the teachers, brought up the rear. This wouldn't normally be a problem but a few miles from the end the moaning started. "I've got blisters", "I'm phoning my Mum to come and get me" "How much further is it?" and that's just the staff!! LOL Only kidding. Not being accustomed to dealing with kids on a daily basis I found it very difficult to be sympathetic!! But found that the promise of a lift back in the mini bus if they made it to the end of the railway line was enough to stop them complaining (for a little while anyway!). The kids I have to say did really well and some of them managed to run/walk it in 3 hours. Way to go.
5 hours after we started out we were back at school for a sit down and the best cup of tea ever. It was a shame that we were expected to do some work when we got back but as I only had a hour to do I shuffled paper for a while :0) 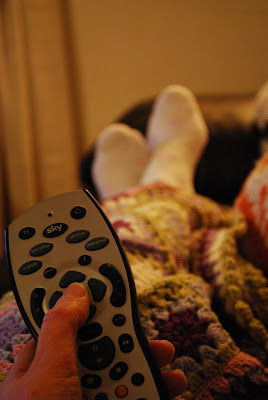 Back home it was a hot bath for me followed by more tea and something to eat. This is the position I will be adopting the second I get off here. The remote control, the settee to myself and more tea.
The end of a perfect day.
Labels: Home