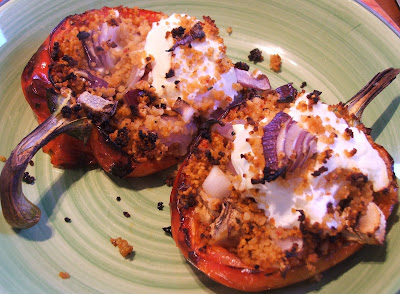 With John being away more I'm having to learn to cook for myself. Today's offering was stuffed peppers as that was what I had in the fridge.

Preheat the oven to 200C/Gas 6/fan oven 180C. Cut the pepper in half through the stalk and scoop out the seeds. Put the pepper on a baking sheet. Drizzle a small amount of olive oil over the pepper, then sprinkle with salt and pepper. Bake for 15 minutes, until the pepper is just tender.

Make up the cous cous as per the packet. Stir in the mushrooms, and red onion. Season with salt and pepper and spoon into the pepper halves. Add a tablespoon of soft cheese to the top and sprinkle with a little cous cous. Return to the oven for 15 minutes, until the topping is golden. Serve with a mixed salad and garlic bread. Or just salad if you're on a diet!!!
Labels: Home