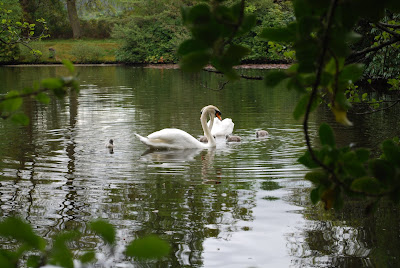 Click to enlarge.
It's official....Mr & Mrs Swan have 7 new babies. The same number as last year. We've been keeping an eye on them for a few weeks but Mrs S has always been on the nest. Two nights ago she had disappeared and we found her and Mr S on the small pond with her wings outspread. John thought that the babies were underneath. It turned out he was right and last night we saw 5 babies on the water. Tonight there are 7 so I think that the grey I could see on Mrs S's back last night must have been the other two!!
Home