The Battle of Britian 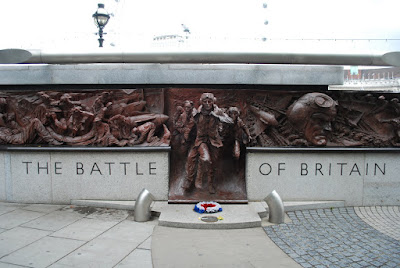 Photo taken on our trip to London - July 2009
"Seventy years ago this date was the turning point in the Battle of Britain. By the end of October the Germans had stopped coming. Hitler’s invasion plans where on indefinite hold. The ‘Few’ had prevailed."

Today is the 70th Anniversary of the Battle of Britain and my brother has put together a little bit of history over on his blog Retro, Air and Track Go and visit it's an amazing post about some of history's most amazing men and women.
And just because my sister and I read this poem at our Dad's memorial 15 years ago, here is
High Flight
Oh! I have slipped the surly bonds of Earth
And danced the skies on laughter-silvered wings;
Sunward I've climbed, and joined the tumbling mirth
Of sun-split clouds, — and done a hundred things
You have not dreamed of — wheeled and soared and swung
High in the sunlit silence. Hov'ring there,
I've chased the shouting wind along, and flung
My eager craft through footless halls of air. . . .

Up, up the long, delirious burning blue
I've topped the wind-swept heights with easy grace
Where never lark, or ever eagle flew —
And, while with silent, lifting mind I've trod
The high untrespassed sanctity of space,
Put out my hand, and touched the face of God.