The death of Major Richard Winters 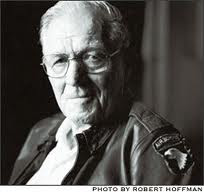 Anyone who has seen Band of Brothers will know who Major Dick Winters is. I was saddened to hear today that he had died on the 2 January 2011 at the age of 92.

On D-Day, June 6, 1944, Winters commanded a group of American troops who parachuted behind enemy lines onto Utah Beach, where thousands of Allied troops landed for the invasion of Normandy.

Winters and his Easy Company went on to fight in the Battle of the Bulge, the last-ditch Nazi offensive in Western France. He also took part in the liberation of the Dachau death camp and numerous other battles. 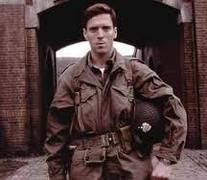 Damian Lewis, who portrayed Dick Winters in the mini series said this of him:

It's a sad day today. Major Richard Winters, without question one of the
great heroes of World War 2, has died. His story, and those of the men
of Easy Company came to prominence through the extraordinary HBO series,
Band of Brothers. I was honoured to have played, no, represent him on
the screen. He was unstinting in his support of the project and of me.
He welcomed me to his house in Hershey, introduced me to his loving
wife, Ethel, and constantly exhorted me to "Hang Tough!"
He has died quietly, in private, without fanfare, with the same modesty
that he lived his life as one of the most celebrated soldiers of his
generation. I will miss him and I thank him."