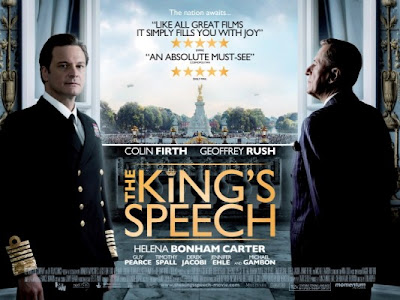 Love, love loved it. My friend Elaine and I went to see this last night and it was brilliant. It's nice to get to see the' other side' of the Royals and even though, due to Artistic Licence some of it was not absolutely correct it was well worth watching. It was a very quick few hours as you got so engrossed with the two main characters the time just flew by. Elaine and I are now officially known as Bertie & Lionel!!!

A rough idea of what the film is about:-
With Colin Firth already winning Best Actor at the Golden Globes , The King’s Speech is already being seen as a front runner for this year’s Oscars. Starring Colin Firth as King George VI who has to overcome his debilitating stutter when he succeeds to the throne on his brother’s abdication. Helena Bonham Carter co-stars as his wife and Geoffrey Rush as his unorthodox speech therapist.
Labels: Home, Movies