Yesterday was Comic Relief 2011 or as it's better known.....Red Nose Day and as in the past it was "Do something funny for money".


Here we are, Elaine , Sharon and me all in red, sporting very fetching red streaks in our hair and wearing our red noses. 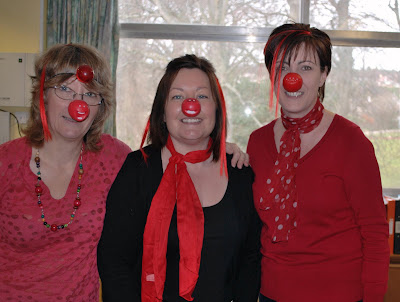 Elaine and Sharon also had on odd shoes and Elaine decided that as she didn't get to wear her Rudolph nose at Christmas she would wear that too. Here she is showing off her lovely outfit for the day. 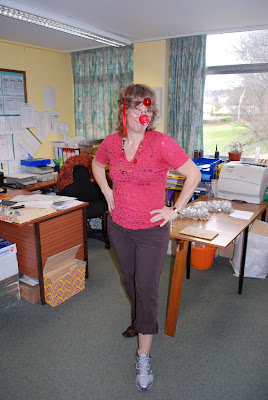 On the table behind her is some of the £1000 raised by the pupils and staff at the school. This is our last Red Nose Day in this school as in next time we will be in our new school.


Samuel's school also did RND and had a come as you please day or dress up as a Superhero. At 14 he feels he's a little 'too old for dressing up' but not wanting to be left out if his mates were doing it he decided to go as Clark Kent. He was going to tell them he couldn't be Superman as his outfit was in the wash!! 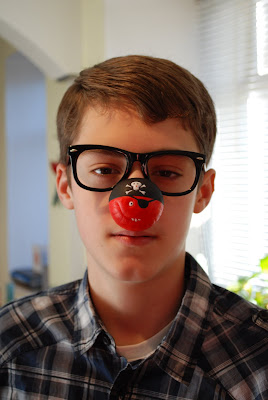 When I asked him if anyone asked who was going as he said he didn't do it as when he got to school he couldn't remember Superman's real name!! Oh dear the youth of today.
All told Comic Relief raised a staggering £74.3 million last night and something in the region of £500 million in the last 25 years. All the money raised goes to helping people in the UK and Africa.
Labels: Work