Today instead of going to a local crop I took Samuel to Waterstones to see his hero Chris Ryan.....SAS hero, actor and author of too many books to mention.  He was there to sign copies of his new book Killing for the Company.  We had pre-ordered the book a few weeks back after my sister had seen the advert in the shop window.
Samuel loves the teenage books he writes and can't wait for the next Agent 21 book to come out.  For those of you who know Samuel, you will know that he isn't the best reader in town but will read into the wee samll hours if something takes his fancy.
In true teenage fashion though, Samuel didn't say a lot to the guy and left me to do most of the talking!!  It's a shame you don't get longer to chat but when there's a queue you can't take up too much of his time.  He did however say it was no trouble for Samuel to have his photo taken with him. 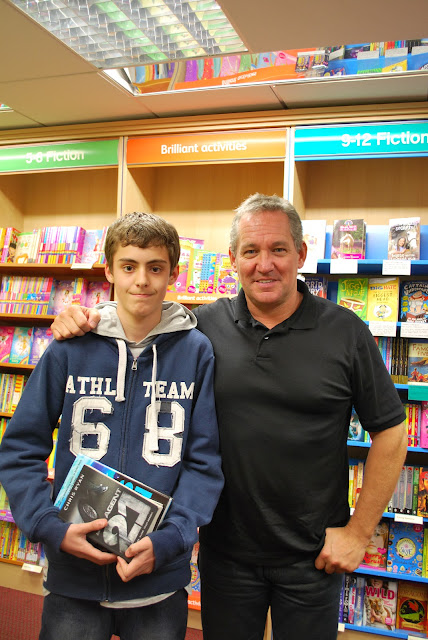 He comes across as a really nice guy with a soft North East accent.  Hard to believe he would have been in a sniper unit while he was in the Army and may have had to shoot someone!!!  This is the second time he's popped into Elgin on his way from Inverness to somewhere else and if he comes again we'll definitely be going back.

Well done Auntie Ruth for spotting the sign.  You have turned your nephew into a reader and made him think it was his idea!!!  :0)
Labels: Books, Home