Before I begin I just wanted to say thank you to those of you who told me to stick with The Distant Hours by Kate Morton.  It was a fabulous read (well the second half was anyway) and as per usual the detective in me got it completely wrong!!


So now I'm reading Heartstone.  The latest installment from C J Sansom.   If this is as good as the last four books I'll have it finished in no time!!! 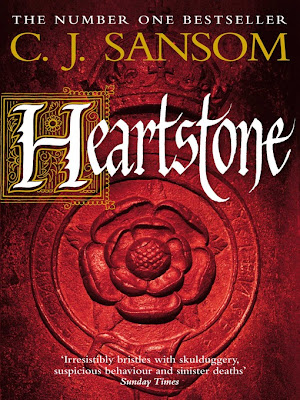 Summer, 1545. England is at war. Henry VIII's invasion of France has gone badly wrong, and a massive French fleet is preparing to sail across the Channel. As the English fleet gathers at Portsmouth, the country raises the largest militia army it has ever seen. The King has debased the currency to pay for the war, and England is in the grip of soaring inflation and economic crisis. Meanwhile Matthew Shardlake is given an intriguing legal case by an old servant of Queen Catherine Parr. Asked to investigate claims of "monstrous wrongs" committed against a young ward of the court, which have already involved one mysterious death, Shardlake and his assistant Barak journey to Portsmouth. Once arrived, Shardlake and Barak find themselves in a city preparing to become a war zone; and Shardlake takes the opportunity to also investigate the mysterious past of Ellen Fettipace, a young woman incarcerated in the Bedlam. The emerging mysteries around the young ward, and the events that destroyed Ellen's family nineteen years before, involve Shardlake in reunions both with an old friend and an old enemy close to the throne. Events will converge on board one of the King’s great warships, primed for battle in Portsmouth harbour . . .
Labels: Books