What do you do on a wet Monday evening in October?  You go to see Blood Brothers of course.  Last night we went to the theatre to see Willy Russell's Blood Brothers and it was absolutely brilliant, hilariously funny and tragic at the same time and a definite must for all theatre buffs. As they say "If you haven't seen it, then go.  If you have, then go and see it again".
The lead role - Mrs Johnston - was played by Niki Evans who I had never heard of but apparently got to the semi-finals of the X-Factor in 2007.  (That was one of the years I didn't watch).  She was amazing as was the guy who played Micky, Sean Jones. 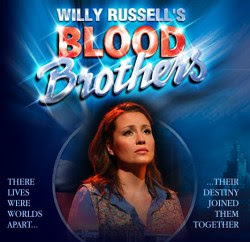 
Blood Brothers is a musical written by Willy Russell.  The story is a contemporary nature vs. nurture plot, revolving around fraternal twins who were separated at birth. The twins' different backgrounds take them to opposite ends of the social spectrum, one becoming an Oxbridge-graduated councillor and the other unemployed and in prison. They both fall in love with the same girl, causing a tear in their friendship and leading to a tragic conclusion.
The musical debuted in 1983, winning the Olivier Award for Best New Musical. The current West End revival is one of the longest-running musical productions in history, opening in 1988 West End and still running as of 2011.
Labels: Theatre