A few weeks ago I received Pass the Book from Alison and having now read and enjoyed it it is my turn to Pass it On.

It's called How I Live Now by Meg Rosoff and it is one of the books from World Book Night 2012.


If you would like the chance to be next to receive this book - and will be able to pass it on - just leave a comment here and I'll pass it on when I get back from my travels. 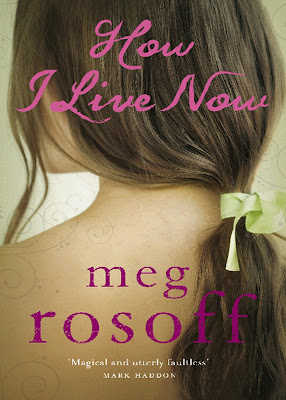 Rarely does a writer come up with a first novel so assured, so powerful and engaging that you can be pretty sure that you will want to read everything that this author is capable of writing. But that is what has happened with Meg Rosoff's How I Live Now, which, even before publication, is being talked of as a likely future classic.
Though billed as a book for older children, the novel is full of shocking events - underage sex, with a whiff of incest, appalling violence. But younger readers, with their relative lack of experience and greater insouciance, may well be less troubled by these things than the many adults who will also read the book.
How I Live Now is the first-person story of Daisy, a smart, stroppy, self-absorbed 15-year-old who arrives from New York's Upper West Side to stay with her English cousins. The four cousins are romantic, bohemian and enjoy an eccentric, faintly feral pastoral idyll of an existence in a rambling English country house, mystically in touch with nature and, indeed, with Daisy.

I've just read on the Internet that it's been made into a film which is due for release next year.  I wonder if it will be worth watching?