Hello and welcome to Story Telling Sunday. This month I'm joining in with Sian's Pick Your Precious

Pick Your Precious is about celebrating the little things you love: those souvenirs, bits and pieces, things from your past you can't bear to throw out. You know, the special little something you have tucked away in a drawer or up on a shelf? Or the thing you  love most in a room? Or the object you would save if you knew you had to leave the country? Your favourite things.

This is Maud and Wilfred 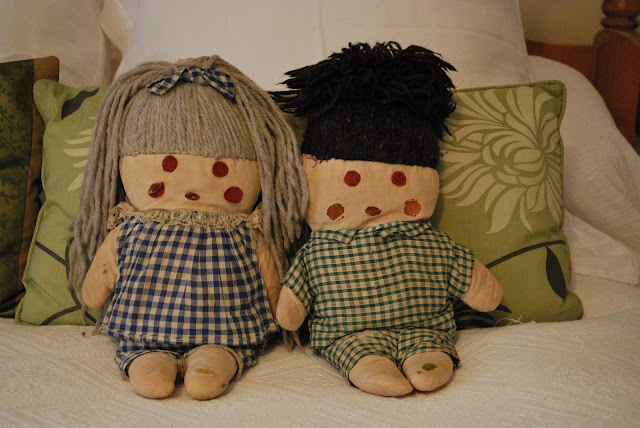 They belonged to my Nana when she was a child in the early 1900s and I have no idea who made them.  One day, possibly in the late 1970s, they came to live me and my sister Ruth.  Maud lived on Ruth's bed and Wilfred lived on mine.  I don't think we ever played with them, probably because we were told they were very old.
When I left home in 1983 Wilfred came with me and travelled far and wide with the Royal Air Force (he really enjoyed himself, although he tells me he would have liked to have seen the Falkland Islands instead of having to stay home in Scotland to keep an eye on things).  Over the next 13 years he sat in my room either in the WRAF block or in my house.
One day he said he was lonely and would like to see Maud again and miraculously she came to live with him.  Now Ruth may say she was kidnapped but I like the think that she was pining for Wilfred and was only too happy to be reunited.  So there they were, together again at last, happy to just sit all day in a comfy chair.
Over the years they became a bit threadbare and bits dropped off (I know how they feel!!) but still they sat together on the chair.
But disaster was to strike when we moved house.  They disappeared!!  No-one knew where they were and for 6 years they were lost. Lost that was, until a recent tidy up of the loft discovered them. Together, wrapped in a plastic bag, in a box at the back of the attic.  They were so happy to be free at last that they rushed downstairs and sat on the bed.  Unfortunately they can't stay there as John doesn't like them (what does he know) so they are going to take up residence on the chair instead.  Just like old times ♥♥♥

And as for their names..............well that too was a mystery until Ruth discovered on the 1911 census that Nana had a brother called Wilfred Ernest who died from measles when he was two.  As for Maud?  Well she will always have to remain a "Woman of Mystery"

You can find more Precious stories over at High in the Sky.  Pop over and take a look.