I've just picked up "Honeymoon for One" by Beth Orsoff as it was 99p on Kindle.  I've never read anything by her before so thought I'd give it a go. 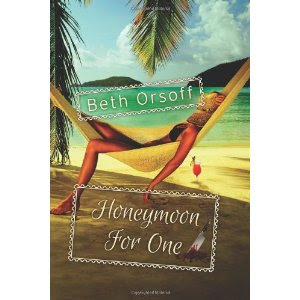 When Lizzie Mancini booked her honeymoon to the secluded Blue Bay Beach Resort on the small Caribbean island of Camus Caye she thought it would be relaxing to spend the week at an isolated couples-only retreat. But that was before she knew she’d be honeymooning sans groom. Touring alone, dining alone, and worst of all, having to explain to the resort’s thirty other guests why she was staying in the bridal suite alone—Lizzie was dreading it. But it still beat the alternative, eight more days hibernating in her empty apartment feeling sorry for herself because her fiancé dumped her at the altar.Then Lizzie meets Michael, a gold-chained antiquities dealer who offers to play her husband for the week no strings (or sex) attached. The plan works perfectly until Lizzie spends the night with scuba instructor Jack, and Michael’s body washes up on Blue Bay’s pristine shore. Lizzie becomes Polizia Nationale’s number one suspect and the only way she can prove her innocence is to solve Michael’s murder herself.
Labels: Books