I've managed to polish off all four Denise Grover Swank book in the last week or so but have had to choose something different now as book five isn't out until June 2014.
I've gone for another Chic Lit.....Bridesmaid Lotto by Rachel Astor. Another freebee on i-books. 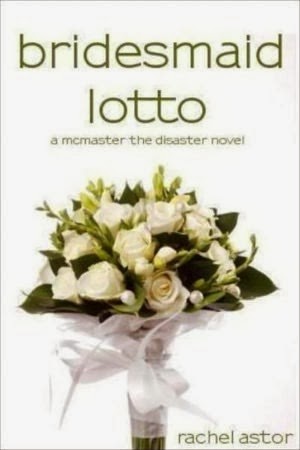 Josephine McMaster is pretty and smart, but very much a klutzy mess. Finally, at 26, she may have actually lost the dreaded ‘McMaster the Disaster’ nickname that has followed her around her whole life. Josie’s quite content to be single, much to her mother’s disappointment. So when a bizarre contest is announced where a socialite is holding a lottery to pick her bridesmaids (and rake in a little extra cash), she can’t roll her eyes fast enough, even if it does mean meeting Jake Hall, her one and only movie star crush. Obviously, Josie doesn’t enter the bridesmaid lottery, so you can imagine her surprise when her picture pops up among the winners, thanks to Mom. With a little prodding -- okay bribing -- Josie agrees to participate.The wedding turns into the event of the year, and Josie finds herself in the middle of a paparazzi feeding frenzy, which gets even crazier after Jake Hall takes a special interest in her. Can Josie handle the pressure in the spotlight? Is it possible she might really have a chance with Jake Hall? And if she’s busy worrying about all that, how in the heck is she going to keep ‘McMaster the Disaster’ from showing up in front of the entire world?
Labels: Books