The last week of term, and an unusual one for me.  The last week of any term is usually full on but this year it was quiet.  It was our first week of working part-time again.  I managed to squeeze five days work into the three days I was in, and then worked from home for the other two, whilst Mrs W was in the office.  It was very quiet at times so I had Radio 2 on in the background. 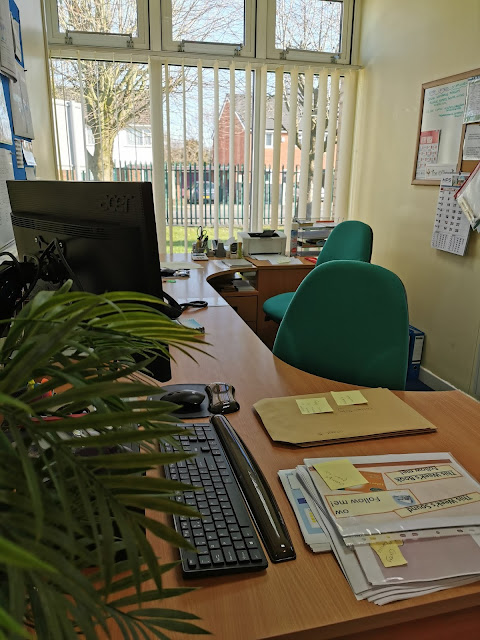 Working from home is a loose term.  There isn't really anything to do apart from keep an eye on the school emails and answer the phone if anyone calls.  I managed to do my ironing, clean the kitchen, put the slow cooker on for the next days dinner and generally potter around.  Oh and there may have been a little bit of crochet going on too, as I've been asked to make another scarf.

Next week is half term, and as hubby is still working, I'm hoping to drag him out every morning for a walk before he starts.  I have nothing else planned apart from housework and crochet.

It's been a chilly week across the UK, except in our little area of the country.  -23C in Braemar and -12C in the village where we used to live along with loads of snow.  Here?  No snow.  Not even a flake. And only -2C. 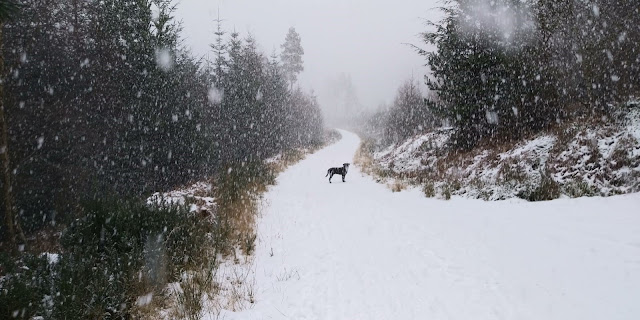 I must admit to feeling a little homesick when my friend sent me a photo of her out walking with her black lab in the snow.  It brought back a lot of good memories.  Our lab, Moss used to love the snow. Especially catching snowballs and sledging.  Mad mutt!!

On the QT.  There have been discussions about a move back up north but nothing definite yet.  Shhhhhhh!!

At the weekend I got out in the garden and gave it a bit of a tidy up.  I didn't stay out there long as it was -1C.  Still it looks a lot better and I could see some of the plants already on their way through.  I'm not a gardener but I do like a nice garden.

After experimenting with headers for my blog, I spent the whole of a chilly and windy Saturday afternoon doing crochet, and I'm not embarrassed to admit that.  I had nowhere to be, nothing to go out for and the housework could wait until next week.  I've nearly finished my second High Tea Floral Throw by the very talented Jen Tyler.  The first one is down in Norfolk keeping my father-in-law warm and toasty on those chilly days.  Later in the day I sat watching the snow fall.  There wasn't very much, but it was quite mesmerizing.

Valentine's day came and went.  Bit of a moan coming up!!

I'm sorry, but if you have to wait for one specific day of the year to say I love you or buy someone flowers what does that say about you?  Hubby and I are in agreement on this and have never bought over priced flowers and cards.  We tell each other every day, that we love each other and that's all that matters.

The rest of Sunday was a chilled out affair.  It rained, it was cold and the best place to be was indoors.  Pottering about, crochet, an old movie on TV and a chocolate muffin with a vanilla latte.  A perfect day.

Hope you're all keeping safe and well.